Design and manufacture of injection
moulds with metal inserts 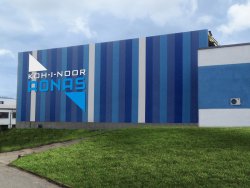 In 1992, the company RONAS, as well as other thirteen companies, split from the holding TESLA. Originally, TESLA was located in the city Rožnov pod Radhoštěm and focused on the production of black and white and colourful television screens and on the production of various electronic components. The market experienced significant changes since the foundation of the company RONAS s.r.o. However, RONAS successfully managed to adapt to these changes and experienced a very dynamic development. The company is the holder of important certificates such as ISO 9001, IATF 16949 and of the Environmental Management Certification ISO 14001.

The tool - shop department creates approximately 28% of the total volume of sales. The majority of produced moulds is intended for serial moulding in the injection moulding department, the rest is sold to external injection moulding companies. Our production is focused on injection moulds for thermoplastics with maximum dimensions 800 x 600 x 600 mm and weight up to 2.5 tons. Moreover, we manufacture shaping and cutting tools -  precision machined parts and components.

The company KOH-I-NOOR RONAS has extensive experience in the field of injection moulding and, therefore, it can offer comprehensive services including the development of a moulding, structural design of a mould as well as its moulding and assembly. The moulds for external companies are tested in our company and, consequently, we recommend our clients suitable solutions for series production moulding. Moreover, our clients can count on professional maintenance and repair service. In order to develop new solutions and technologies, KOH-I-NOOR RONAS cooperates not only with skilled engineers and designers, but also with the Tomas Bata University located in Zlín. There are many important automotive industry suppliers located in the Czech Republic and, therefore, KOH-I-NOOR RONAS sells 60% of its production to the domestic market. Moreover, the company has established a firm business relationship with Germany.

Despite the instability on the automotive market, KOH-I-OOR RONAS has earned much success in terms of its turnover rate. While the years 2012 and 2013 saw the approximate turnover of CZK 320 million, beginning from 2014, the revenues of Koh-I-Noor Ronas has steadily reached the mark of CZK 350 million, and an increase of up to CZK 360 million is expected for 2017.

As one of the latest massive investments carried out in KOH-I-NOOR RONAS, CZK 100 million was expended on furnishing the pressing shop during 2005-2006.
Funds continued to be invested in machinery in 2014, when ca. CZK 27 million in total was invested - a new sinking CNC machine from company CHARMILES and CNC machining centre HERMLE were put into operation. In addition, a new injection press ARBURG was procured and certain presses were fitted with automation equipment to fill inserts and check parameters of pressed parts. Further investments were directed at the quality control section, which was equipped with a new helium leakage tester.

The amount of ca. CZK 37 million was invested in 2015, when the development of a new warehouse for the pressing shop of plastic materials was completed for ca. CZK 15 million. Moreover, the project for increasing production competitiveness and productivity continued in 2015 with respect to the company’s stock of machinery, when new productive machines were purchased - two CNC machining centres and a wire cutting machine for the tool shop. The pressing shop was furnished with another injection press and one press was fitted with automation equipment for feeding inserts. Other investments headed for the quality control section, where a new control station to check inserts for leakage was procured for the pressing shop and a new optical measuring device was installed in the tool shop.